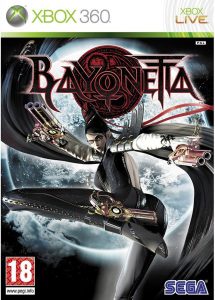 Bayonetta is an action-adventure hack’n’slash video game developed by PlatinumGames and published by Sega.
The game was originally released for Xbox 360 and PlayStation 3 in Japan in October 2009, and in North America and Europe in January 2010. The game was later released on the Wii U alongside its sequel, Bayonetta 2, releasing in September 2014 in Japan and worldwide the following month. An enhanced port for Microsoft Windows was released in April 2017 with support for 4K visuals. The game was released on the Nintendo Switch in February 2018 worldwide, also alongside its sequel. A third title, Bayonetta 3, is currently in development and is set to release on the Nintendo Switch console.

Bayonetta takes place in Vigrid, a fictional city in Italy. The game stars the eponymous character, a witch who is capable of shapeshifting and using various firearms. She also possesses magical attacks, and she can use her hair to summon demons to dispatch her foes. The game features a rating system, which gives players a grade based on their performance, and a combat system that is similar to the Devil May Cry series, also created by Bayonetta creator Hideki Kamiya. 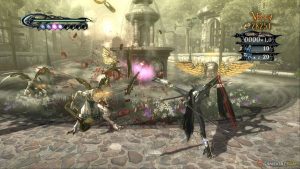 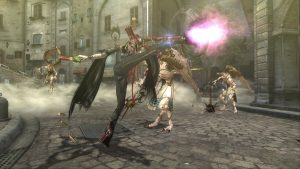