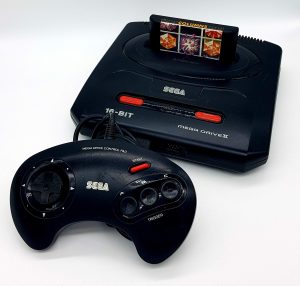 Designed by an R&D team supervised by Hideki Sato and Masami Ishikawa, the hardware was adapted from Sega’s System 16 arcade board, centered on a Motorola 68000 processor as the CPU, a Zilog Z80 as a sound controller, and a video system supporting hardware sprites, tiles, and scrolling. The system plays a library of more than 900 games created by Sega and a wide array of third-party publishers and delivered on ROM-based cartridges. The Genesis has benefited from several add-ons, including a Power Base Converter to play Master System games, as well as multiple first and third party licensed variations of the console. Sega created two network services to support the Genesis: Sega Meganet and Sega Channel.

In 1993, Sega introduced a smaller, lighter version of the first Mega Drive known as the Mega Drive 2 in Japan, Europe, and Australia and simply sold as Genesis (without the Sega prefix) in North America.