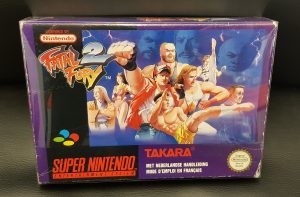 After Geese Howard’s death in the original Fatal Fury, a mysterious nobleman becomes the sponsor of the new “King of Fighters” tournament. This time, the tournament is held worldwide with fighters around the globe competing. As the single-player mode progresses, the mysterious challenger begins defeating the participants from the first Fatal Fury game, searching for the man responsible for defeating Geese.