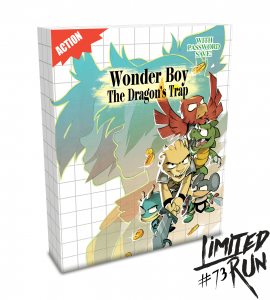 Wonder Boy: The Dragon’s Trap is a platform action-adventure video game developed by Lizardcube and published by DotEmu. The game is a remake of the 1989 game Wonder Boy III: The Dragon’s Trap, which was originally developed by Westone Bit Entertainment and published by Sega for the Master System as part of the Wonder Boy series. The game was released on Nintendo Switch, PlayStation 4, and Xbox One on 18 April 2017, for Microsoft Windows on 8 June 2017, and for macOS and Linux on 18 July 2017.

Wonder Boy: The Dragon’s Trap is a remake of the original Wonder Boy III: The Dragon’s Trap, with gameplay reverse engineered from the original Master System code, featuring brand new hand-drawn graphics and musical rearrangements. Set immediately after the events of Wonder Boy in Monster Land, players control an adventurer who, upon defeating the Mecha Dragon, has become afflicted with a curse turning them into a Lizard-Man. The player must journey across the world and defeat all the other dragons in the land in order to return to human form. Like in the original game, players explore various lands, defeating enemies to earn items, such as arrows and fireballs, and money which can be used to purchase new weapons and armor. Over the course of the game, the player gains new animals forms, each with new abilities allowing for additional exploration. These include Lizard-Man, who can spit fire, Mouse-Man, who can cling onto checkerboard-patterned blocks, Piranha-Man, who can swim underwater, Lion-Man, who can perform a vertical slash attack, and Hawk-Man, who can fly through the air. 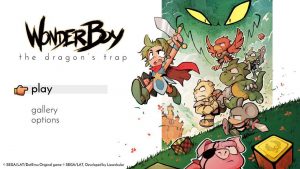 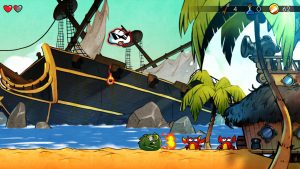 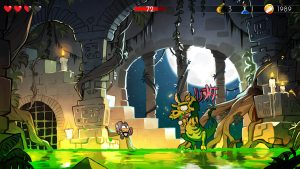 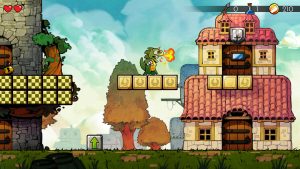