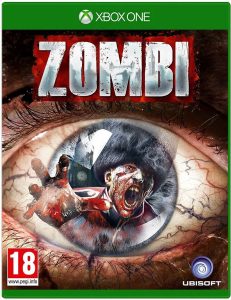 Zombi is a first-person survival horror video game developed by Ubisoft Montpellier and published by Ubisoft. It was released for the Wii U as one of its launch games in November 2012. In the game, the player assumes control of a human survivor amid a 2012 zombie apocalypse. Featuring a permadeath system, it uses the Wii U GamePad extensively to scan the environment and maintain the survivor’s inventory. ZombiU was released for Microsoft Windows, PlayStation 4 and Xbox One in 2015 as Zombi. The port, handled by Straight Right, adds new melee weapons and removes the multiplayer feature.

Four hundred years ago, scientist John Dee made what was known as the Black Prophecy. The Prepper (an ex-army, no-nonsense man) prepares for the coming apocalypse, and a secret society known as the Ravens of Dee researches Dee’s predictions to stop them from taking place. In November 2012, the Black Prophecy begins to be realized in the form of an outbreak of zombies in London.

After the outbreak the player character is led to the Prepper’s bunker, where he receives weapons, a bug-out bag and the Prepper Pad, a device with a built-in scanner and radar. The Prepper, a Raven of Dee, left the organization due to a difference in interpreting Dee’s prophecy. According to the scientist, Black Angels would save the world; the Ravens thought that Dee was referring to their organization, but the Prepper believed that he was talking about something worse.

The player goes underground while scavenging at Buckingham Palace and is contacted by Dr. Knight, a physician for the Royal Family who is trying to find a cure. He orders the player to find diaries and notes left by Dee in exchange for scanner upgrades and a virucide, a chemical capable of killing those infected. This is done without the Prepper’s knowledge, who believes that a cure is impossible. After leaving the palace the player is contacted by Sondra, who leads him to the remnants of the Ravens of Dee and tries to escape with the player in a helicopter on the Tower of London. A supernatural force drives a flock of ravens into the propeller, making the helicopter crash. The player returns to the Prepper’s bunker, and Sondra promises to save them.

In the bunker, the generator is running out of fuel and the Prepper tells the player to get petrol from a man named Vikram. The player finds Vikram, who has gone mad; he and his young child tell the player to go to a local nursery to get antibiotics for his wife. Despite the Prepper’s protests (who thinks the player should raid the petrol station), he goes to the nursery; the staff and children have been eaten by a nurse, who became a ghost-like monster capable of teleportation. The player returns with the antibiotics to find that Vikram has become a zombie and eaten his family, forcing the player to kill him.

On the way back to the bunker with the petrol, the player receives a distress signal from a young girl that she and her family are barricaded in St. George’s Church. Although the Prepper correctly insists it is a trap, the player goes to rescue her. The player is kidnapped by Boris (the self-proclaimed King of Zombies) and his gang, who force survivors to fight off waves of zombies in the church’s courtyard. Boris’ lights, microphone, and music attract a horde of zombies, and he and his gang are eaten whilst the player escapes.

The player has enough upgrades to collect Dee’s remaining letters for Dr. Knight, who believes that he can now make a Panacea. He returns to the safe house, where Knight informs him that the Panacea is not a cure but a vaccine. The Prepper expresses profound disappointment in the player as he returns to Buckingham Palace. Knight has left his bunker for the queen’s quarters to access data on a USB key. The player makes his way through the palace, discovering that Knight has been killed and turned into a zombie. The player uses Knight’s eye to bypass a retinal scanner and collect the USB key.

They run back to the Tower of London as the RAF is about to firebomb London and Sondra tries to keep her promise to rescue the player. This enrages The Prepper, who orders the player to leave the safe house and vows to outlive the Ravens of Dee. After the player leaves, the Prepper (who has been using survivors to stock his food supplies) finds a new lackey to do his bidding in a cutscene. The player reaches Sondra and leaves London as the RAF (the prophecy’s Black Angels) destroy the city.